Reviews on Project 5.3 Talk to a Human

Reviews on Project 5.4 Who is Ann

The 2nd album in the Project 5 series.

"Terri Hendrix is a native Texan and a lifelong resident of the state. She's well steeped in the state's independent way of taking on and creating musical traditions. She's run her own label since before that was a common, or cool, thing to do, and she's created a non profit arts center OYOU (an acronym for Own Your Own Universe). For her album Slaughterhouse Sessions, Hendrix draws mainly on the folk blues/ gospel range of tradition, creating original songs that speak of faith and struggle and triumph hewed from day to day life and served up in a voice and with a musical style that perfectly suits the silk meets burlap edge to the songs. Most songs are collaborations with long time musical cohort Lloyd Maines, with a few well chosen covers added in. Henrdrix's distinctive voice and the pulsing rhythm she and Maines create run through all the music. Listen out for Troubles on Your Mind, One of These Mornings, and a fine take on A.P. Carter's Sun of the Soul. Listen out for more from Hendrix, too: this is the second part of a five part project Hendrix is creating." — Kerry Dexter


"Terri Hendrix may not be mainstream, but she's a thought provoking artist who crafts beautiful music." - Ken Murray KTTX/KWHI

The 1st album in the Project 5 series. 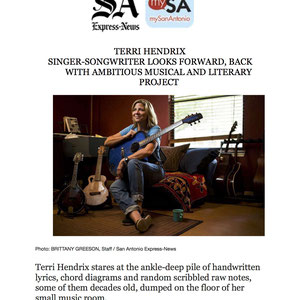 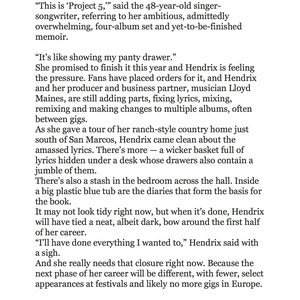 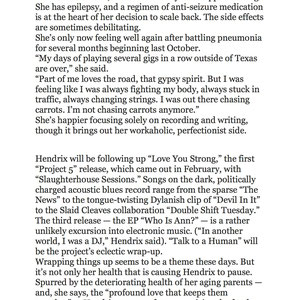 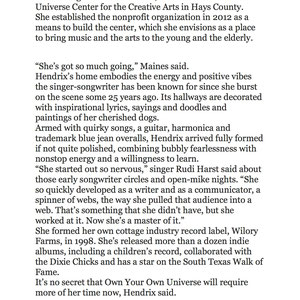 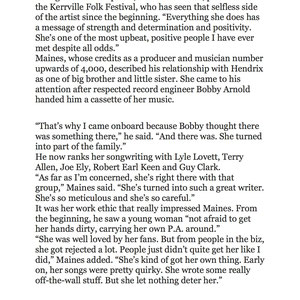 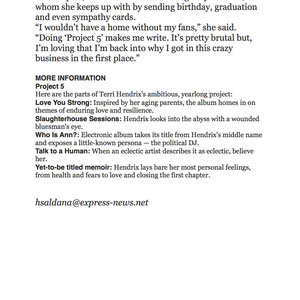 "It takes an almost brutally honest songwriter to say “I wish the holidays brought out the best in me, these days are hard to spend with my family.” There’s a lot of variety, The Rant is frankly self-assertive (“I’d bet on me to win if I were you”), Texas Star, with Eliza Gilkyson harmonies, celebrates Ann Richards, Barbara Jordan, Molly Ivens and Liz Carpenter, Calle De Los Niños describes the funeral of a Mexican child lost to violence, Fifty Shades Of Hey showcases Hendrix’s sense of humor and Mingulay Boat Song is an arrangement of a 30s Gaelic song, but I keep circling back to the sensational title track, “I wish you could trust me, I wish you could lose your doubt, the second-guessing I could do without.” If she keeps this standard up for the next three albums, Project 5 will be a landmark in Texas music."

Rootstime.be has been translated to English. For the original review, please click on image of review.

The mission of the OYOU ("Own Your Own Universe" 501(c)(3) nonprofit) is to make the arts accessible to everyone. Our events empower and transform lives by connecting the mind, body, and spirit, through music and the creative arts.